Y7 Yoga: Give Me Two Weeks 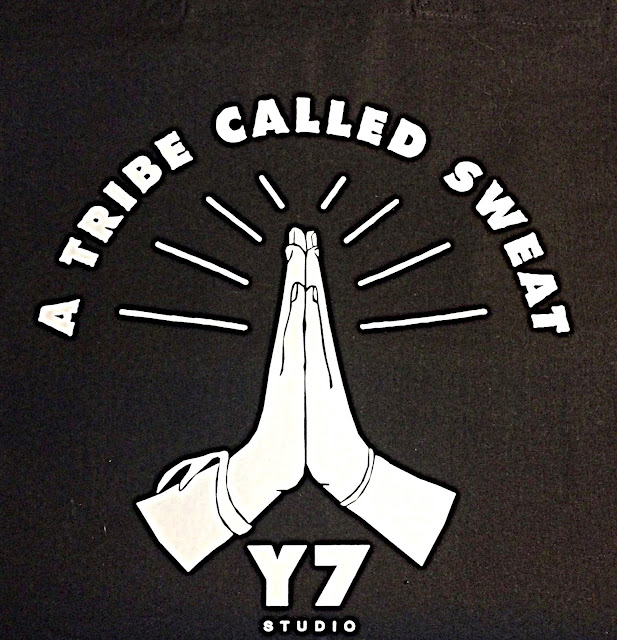 One day short of two weeks into the new year, I accidentally became a walking cliche: a newly dedicated fitness fanatic. The truth is, as someone who attended a regular yoga class for nearly a year until the studio I'd loved for its positive energy and intimate classes (sometimes so intimate it was me and one other person) closed down, its taken me about 6 years ago to commit to another studio. What started as one afternoon of yoga class over the holidays turned into more than I'd anticipated.

With studios in Williamsburg, Flatiron and SoHo, one of the first draws to Y7 Yoga was the ease in which I could coerce my friends to the multiple studio locations. The buddy system is one of the only ways I can trust myself to get started on a new workout routine. My friend and I first went to a class one freezing late December afternoon in Williamsburg. Despite my initial skepticism of a "hip hop" yoga class being nothing more than a marketing gimmick, after the first class I found myself attempting to negotiate my way into the 2 week unlimited pass I had initially decided against purchasing as a new student. Thankfully, rational and kind people still exist in this world and specifically at Y7 Yoga. With two weeks of unlimited hot yoga ahead of me, the anxiety of actually making the most of the two weeks began to set in.

When I invest in a pack of classes, disappointment seems inevitable. Not because of the classes themselves, but because of my schedule and my dedication (or lack there of) to a new routine. Maybe it was initially knowing a friend was expecting to meet me at class that got me to keep going back. Perhaps it was the moment in my second class where I couldn't tell if I was sweating from the 80-90 degree room or tearing up as I let the instructions to think about who I would be if I was my authentic, true self sink in. If not either of those moments, then the David Bowie tribute class may have sucked me in. Or was it the Tupac class that inspired me for a full two minutes to dream about opening an off-shoot yoga studio dedicated to Mr. Shakur? With Drake heavy in rotation, things get fuzzy, emotions get raw. Feelings are best felt in a sweaty, dark, candlelit room after all.

What I can say is that I was reminded of the glory days when I was a regular at my former yoga studio -- with the added edition of a room heated enough to make me sweat but to not make me feel like passing out or vomiting. After class my shoulders weren't tight, my lower back didn't feel crunched up. Each class follows a general protocol of a beginning warm up, three vinyasa flows where you progress from a slower pace to flowing at your own pace, then a final portion of yoga poses. Some level of predictability to gauge how much longer I had to survive through and music that made me forget that my legs may be shaking was just what I needed to get back into yoga, turns out.

If you haven't yet tried Y7, I'm quite jealous that you still have the opportunity to purchase the New Student Package, $45 for two weeks or $99 for a month of unlimited yoga. You can also just purchase one class, but you may want to learn from my mistake and go straight for the unlimited. You can learn more about Y7 Yoga or just go ahead and book your class here.

Popular posts from this blog

Bro's Guide: How to Become an Adult

September 20, 2015
Reflecting back on what your life was like at 23 years old is one thing. Seeing it through the eyes of your youngest sibling is an entirely different experience. My youngest (and only) brother graduated from college this past spring. I took the occasion to give him a proper adult gift: a watch. I also took this as an opportunity to force him to talk to me about what it's like to be transitioning from college life to adult life as an oft misunderstood young millennial. He kindly humored me.
Read more

A thing I thought I'd never do

January 04, 2017
Yes, yes I did shave my face. Not for this blog, really. As you may note its been awhile since I've had the chance to share any beauty advice or musings here. However, I did shave my face for the sake of trying it out. If I don't write an article on it, it really doesn't count now does it? So, yes, validating a reason for experimentation with my own facial hair may have forced me back to writing.
Read more

March 20, 2016
Being a woman trying to balance whatever the constellation of life's responsibilities you're managing at any given moment -- whether that be work, friends, or family, or even making time for Netflix binging (I'm coming for you Claire Underwood, I promise) -- can bring its own set of challenges. Being a woman in a country affected by war, where women and children are most often disproportionately affected by the aftermath of conflict is a reality many of us choose to not even spend much time contemplating, let alone beginning to fathom what day to day life can look like for these women.
Read more

Beauty Unbiased
Beauty- without losing your soul. Discover new beauty trends and products that work to make you feel like the best version of yourself.