Prove It! Review of the Philips PureRadiance Facial Cleansing System

With the increasing popularity of high-tech cleansing tools in the beauty world, I probably shouldn't admit this, but I'd never actually tried one until two months ago. For one, most of these tools are quite an investment at around $150 a piece. With dry and at times sensitive skin, the idea of scrubbing away layers of my face is scary. Yes, exfoliation is an important step of a skin care routine, but if you've dealt with products that have made your skin freak out before, you may also understand the struggle against exfoliator-induced panic attacks.

All of these concerns were placed at the back of my mind when I was given the chance to try out the Philips PureRadiance Facial Cleansing System, an electronic face brush comparable in both price and function to the popular Clarisonic brush. Two things in particular greatly reduced my urge to run away from the vibrating, advanced dual-motion brush that claims to remove 10x the amount of makeup and other residue from the face than regular cleansing. 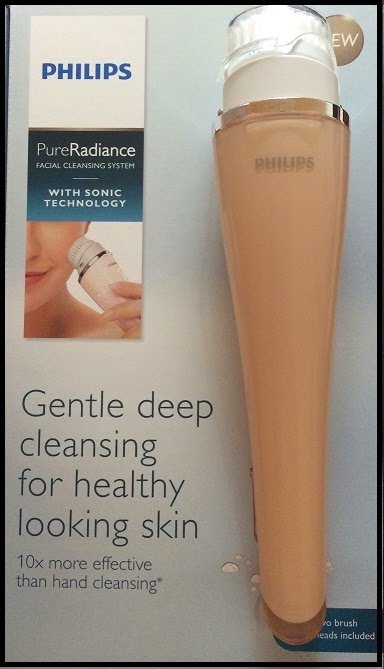 1.) I used a Philips Sonicare toothbrush for years (until one fateful day when I accidently left it on for eight hours straight) and my teeth never felt better, short of a good cleaning at the dentist. I figured the cleansing system was worth a shot if it used the same Philips sonic technology.

2.) The fact that celebrity facialist Joanna Vargas, whose Fifth Avenue spa focuses on natural and organic skin care products, partnered with Philips for the US launch of the beauty tool made me hopeful that the brush wouldn't be overly harsh on my skin. True story: the only time I have been able to walk away from a facial and straight to dinner with friends without applying makeup happened after a visit to Joanna Vargas' spa.

Although officially approved for use twice a day, I heeded advice of friends who had overdone it with their cleansing brushes and started off nice and slow. After my first use, I noticed an immediate difference in my skin the next morning, particularly with the small breakouts around my chin. They had shrunk in size, the redness was less visible, and my skin felt smoother and had an overall healthier glow. Of course after that I took things a little too far, using the tool three times in one week and noticing that the skin around my nose was peeling a bit. This is why I can't have nice things.

Realistically, I've never needed to exfoliate my skin three times in one week. What made me think I needed to do it more often because I had a fancy new tool? It took me a few weeks to acknowledge that just because the PureRadiance brush was super easy to integrate into a skin care routine, especially with the one minute timer which beeps in three-section intervals as a reminder to move to another area of the face, that doesn't mean I need to be using it that often. To thine own skin be true, as Shakespeare once said (well, I'm paraphrasing).

I'm now down to using the tool once or twice a week. The Philips PureRadiance brush has become my gateway to an indulgent evening of cleansing, a good hydrating face mask (one of my favorites is from Mario Badescu) and some mint chocolate chip ice cream.

You can purchase the Philips PureRadiance Cleansing System at Bed, Bath and Beyond for $125 (with an instant $25 rebate) at the time of this post, and at Philips.com for $150.

Popular posts from this blog

Bro's Guide: How to Become an Adult

September 20, 2015
Reflecting back on what your life was like at 23 years old is one thing. Seeing it through the eyes of your youngest sibling is an entirely different experience. My youngest (and only) brother graduated from college this past spring. I took the occasion to give him a proper adult gift: a watch. I also took this as an opportunity to force him to talk to me about what it's like to be transitioning from college life to adult life as an oft misunderstood young millennial. He kindly humored me.
Read more

A thing I thought I'd never do

January 04, 2017
Yes, yes I did shave my face. Not for this blog, really. As you may note its been awhile since I've had the chance to share any beauty advice or musings here. However, I did shave my face for the sake of trying it out. If I don't write an article on it, it really doesn't count now does it? So, yes, validating a reason for experimentation with my own facial hair may have forced me back to writing.
Read more

March 20, 2016
Being a woman trying to balance whatever the constellation of life's responsibilities you're managing at any given moment -- whether that be work, friends, or family, or even making time for Netflix binging (I'm coming for you Claire Underwood, I promise) -- can bring its own set of challenges. Being a woman in a country affected by war, where women and children are most often disproportionately affected by the aftermath of conflict is a reality many of us choose to not even spend much time contemplating, let alone beginning to fathom what day to day life can look like for these women.
Read more

Beauty Unbiased
Beauty- without losing your soul. Discover new beauty trends and products that work to make you feel like the best version of yourself.